It's always interesting how history makes it's mark on the future. In terms of techno-culture today via wireless technology, alternative fuel searches, software we use everyday, entertainment achievements in CGI, and virtual reality communities, the form that it usually takes is "ultra modern." Streamline and simple is the plan. Of, course. Unless you have some romance in your soul.

Am I comforted by the spare interface and simplicity of my surroundings? Do I find a home there? Is the deconstructivist aspect to technology really the way I feel about my life? I certainly don't want my digital tools to become more complicated. As these things become more standardized, couldn't we make them a little more interesting? That is the question that Steam Punk culture answers in a 19th century way. There was a time when tech was small and decoration was big; a quality crafted object meant it did something great. The objects pumped out by industry today a hundred years ago would have required thousands of hours of carving, shaping, and sculpting to resemble an object worthy of what the tech does. Shouldn't a laptop be made of copper and precious metals, minerals and gems? Something permanent? Something solid and real? Something we keep for decades rather than throw out in five years? 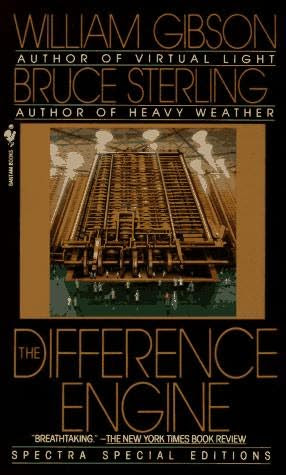 I, like most of you, haven't done so much Victorian age reading. But, I have read, "The Difference Engine," by Gibson and Sterling. An "Alternative History," it describes a world where we made computers but they weren't silicon, rather, computers were a warehouse-sized series of brass gears with hundreds of lab coated techs to service them. This is based on an actutal gear driven computer developed by Charles Babbage. Neal Stephensons, "Diamond Age" is also considered Steam Punk, but adds the oddity of nanotechnology to the loop. The animation "Steamboy" takes the imaginary world of the Victorian age and creates a science fiction thriller out of it with a Japamation bent.

What deepens the cultural interest in this subject is that it binds the Goth-Vampire-Magic world, aka HP Lovecraft and Alastair Crawley with the Sci-Fi world aka Jules Verne. Two great tastes that go good together. Today, with our spare techo life and tools, we have to look at the past for something to fill the soul of our the amazing machines. I'm giving this movement of fantasy more cultural weight than other fringe movements restricted to insulated segments of the populace such as: Rennaissance Festival attendies, Star Trek convention costumers, and Star Wars enthusiasts. Why? Because although the fiction collection is small, the idea has spawned thousands of home-spun artisans to create aspects of the fiction even though it isn't written. The fans are writing the world and making everything in it.

How are they discovering the details of this history? The internet. Most of those crumbly hard-bound books of the era have been long ago tossed out. Art and design further back than 70 yrs ago is considered class structure decoration and not personally empowering in the schools. The fashion considered over-wrought and decadent. An entire century has been blotted out but rediscovered through the internet. The oddity collectors, the antique fetishists and history fanatics have offered up their wares in electronic form.

Artists need to be celebrated, not feared and loathed by it's elitist and uninterpretable political commentary. (You know, being an artist is a mighty political stance in itself.) Like the low-brow artworld of Juxtapoz, there is an underground rebellion to the academic art world. People are seeking an art of the imagination. A world of quality objects and a need for the ornate in everyday life. The Art Nouvou movement was a way to find meaning through the nature wisdom of classical Roman and Greek mythology as a rebuttal to the industrial revolution. Steam Punk accepts technology and is finding meaning in information technology by comparison to the industrial revolution! 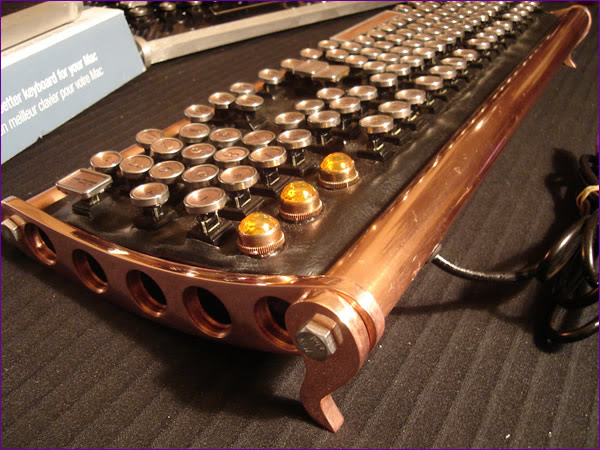 People making things 100 yrs ago had the lay person ability to make incredibly intricate inventions with only basic material skills. Nearly any technology could be made of gears, steam engines, pulleys, cables, glue, leather, glass, brass, wheels, hinges. Today, no. To make anything cutting edge requires a team of engineers. There died the crazed inventor in his basement.

So, as masters of our own universes, 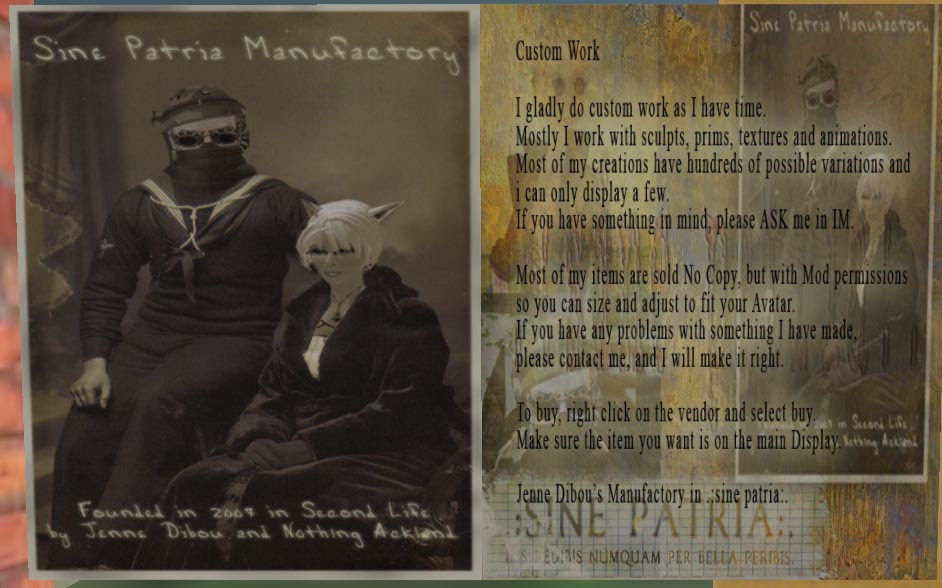 we have the power and free time in the 21st century to create alternative histories. The best known, and not before Newsweek found him, is DOC and he shows you how he makes his Steam Punk computer keyboards: Steam Punk Workshop In SecondLife, there are 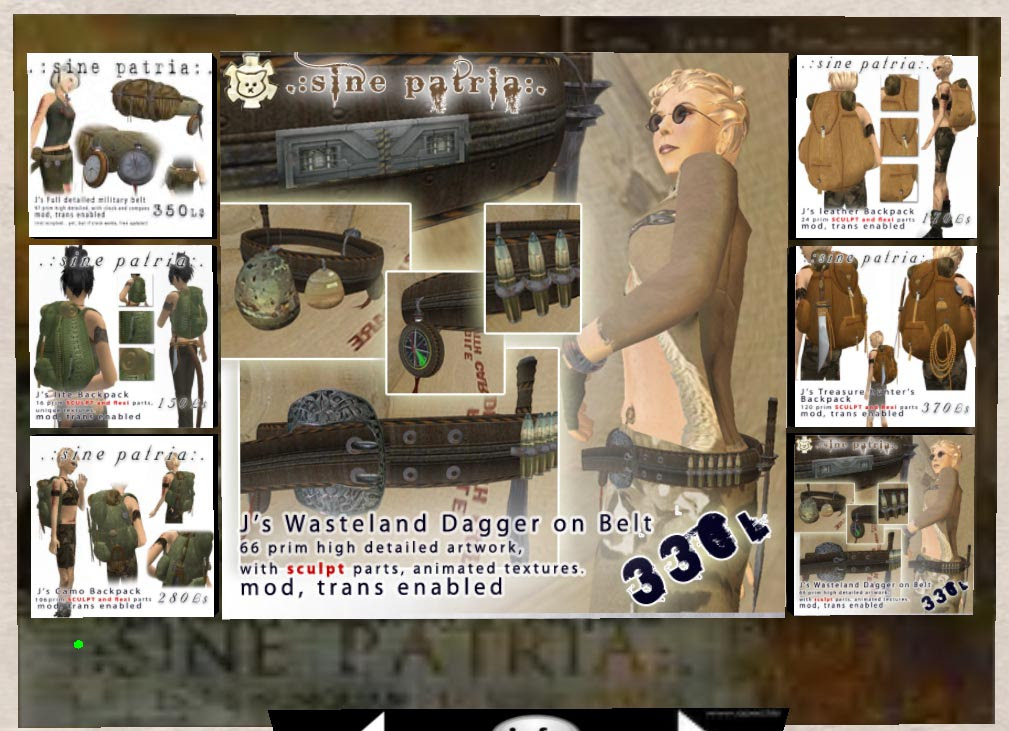 whole worlds and everything you can imagine to build buildings and clothe yourself with in a Steam Punk way.

On Ebay, there are artists creating "Science Kits" and artifacts that can only be described as faux historical art. Like stage props. Fictional objects for a fiction imagined as a group, not the direct result of a movie or a book. Shadowboxes of images and objects that suggest a fiction. The photos are of "The Lost Dinosaur" but I've also seen werewolf hunting kits etc. I love it! The imagination just runs wild at this point.. 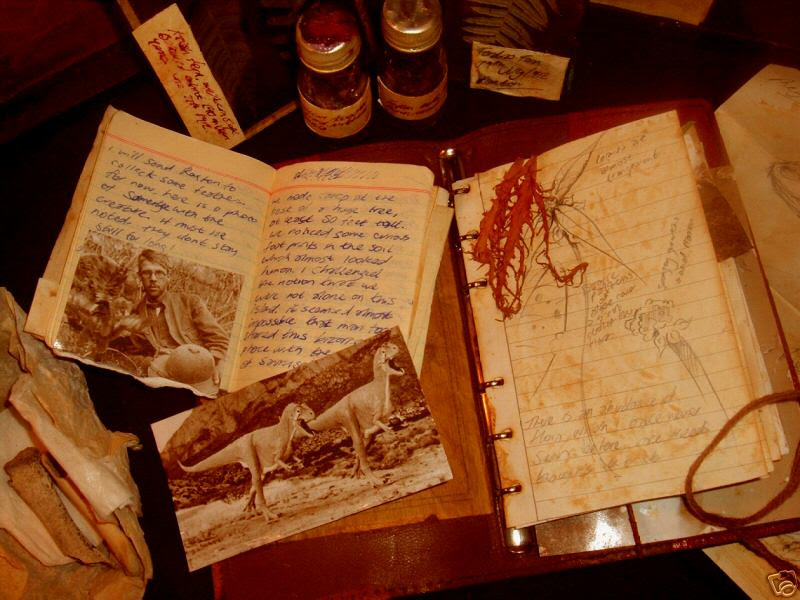 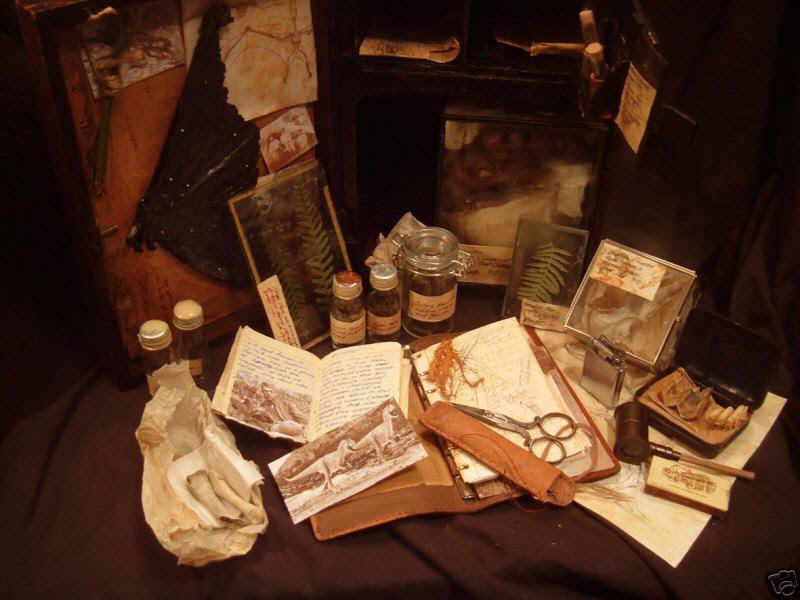